Darren Moore has praised his medical staff at the club and at Doncaster Royal Infirmary as Reece James looks set to play his first minutes of football since picking up an injury against Bolton Wanderers in February.

The left-back needed an operation due to a severe laceration to his left shin but will join up with Gary McSheffrey’s U23s team ahead of their Premier League Cup match on Friday. 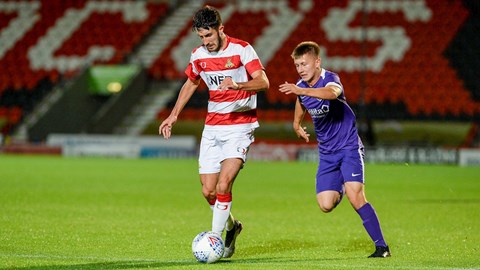 “Reece James will join up with the U23s squad for the game at West Brom which is great for him and great for us,” said Moore.

“For him to participate in a game like that will be great. Assuming there are no adverse reactions then he’ll be back in with us as which is a bonus for Wimbledon.

“Reece has come back quickly. Credit to him, our medical team, and the staff at the hospital here in Doncaster. Reece was full of praise for them and how they looked after him and the operation was successful.”

Moore believes that Friday evening’s match will provide a difficult test for both McSheffrey and his young side.

“It’ll be a great game. West Brom have got some wonderful young players and it will be a hard test for us,” he added.

“It’s been a really good competition for us – to get this stage has been a good achievement and Gary’s really enjoyed it because he’s gone away to some tough grounds and come away with results.

“We wish him and the team well. Gary’s going to have to be good tomorrow to make sure his team comes away with a result.”