After photographs of a 116 year old Doncaster Rovers season ticket recently appeared on a Facebook group, club historian John Coyle takes on a trip down memory lane back to the 1904-05 season.

Some photographs of a 1904-05 Doncaster Rovers season ticket appeared recently on the “Looking Back at Doncaster” Facebook group. They were posted by Ian Wilson and we are grateful to Ian for allowing these pictures to appear here. This is the story of a remarkable piece of the rich history of Doncaster Rovers FC. 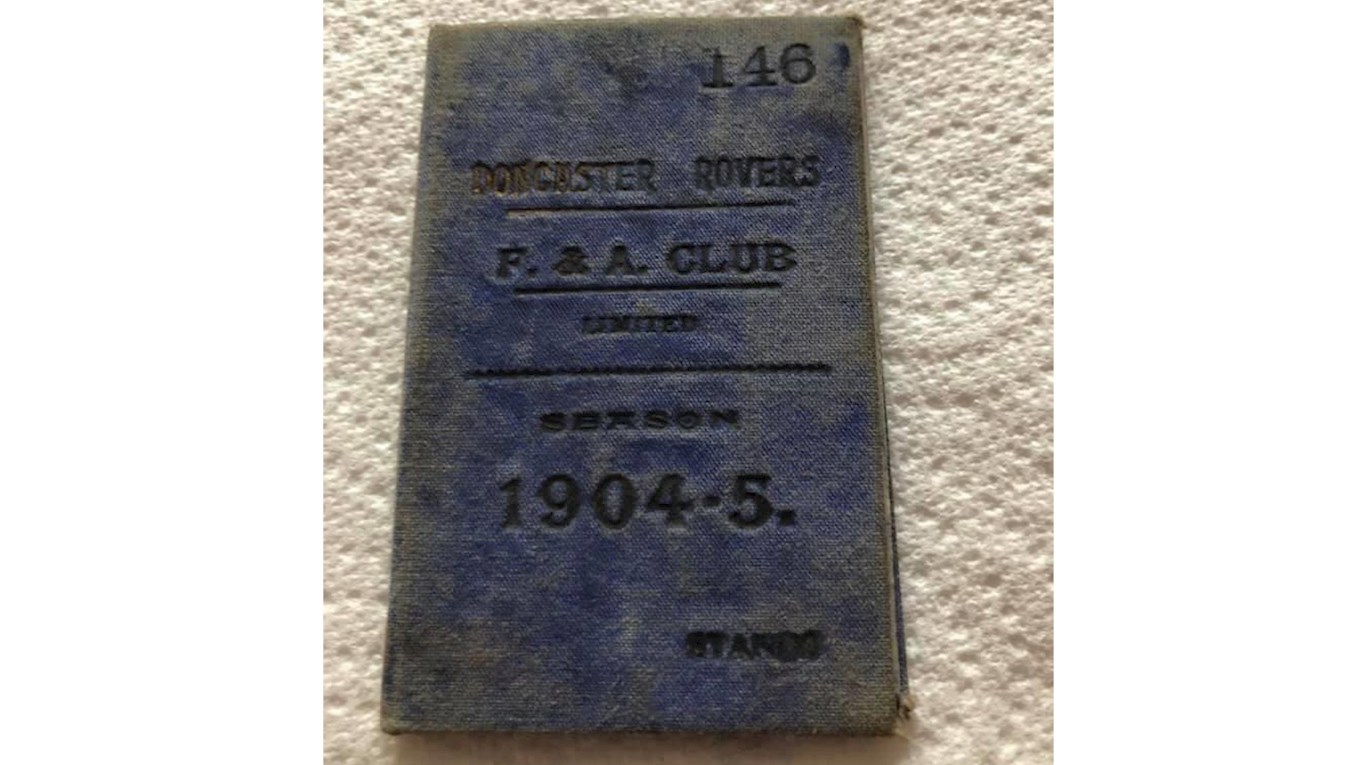 This is the front cover of the season ticket booklet, quite different to the voucher books currently used at the Keepmoat Stadium or the bar-coded swipe cards used by some clubs. In design, it is like the sort of ticket issued to members of County Cricket clubs up to about 20 years ago.

The ticket is for the Stand and would have admitted the bearer to the Intake Ground and to the seated Grandstand for all League matches in 1904-05. Admission to the ground was gained via a gate just off Town Moor Avenue and the Grandstand stood on the opposite side of the ground from the entrance. Stand season tickets were the most expensive, priced at 15 shillings (75p in today’s decimal currency and worth between £90 and £100 in modern terms). Other season tickets could be purchased for Ground only (10 shillings, 50p and around £60-70) or for “Ladies and Boys, Ground only” (5 shillings, 25p and around £30-35). The standard admission price for men was 6 pence (2 1/2p) with concessions for the aforementioned “Ladies and Boys.” 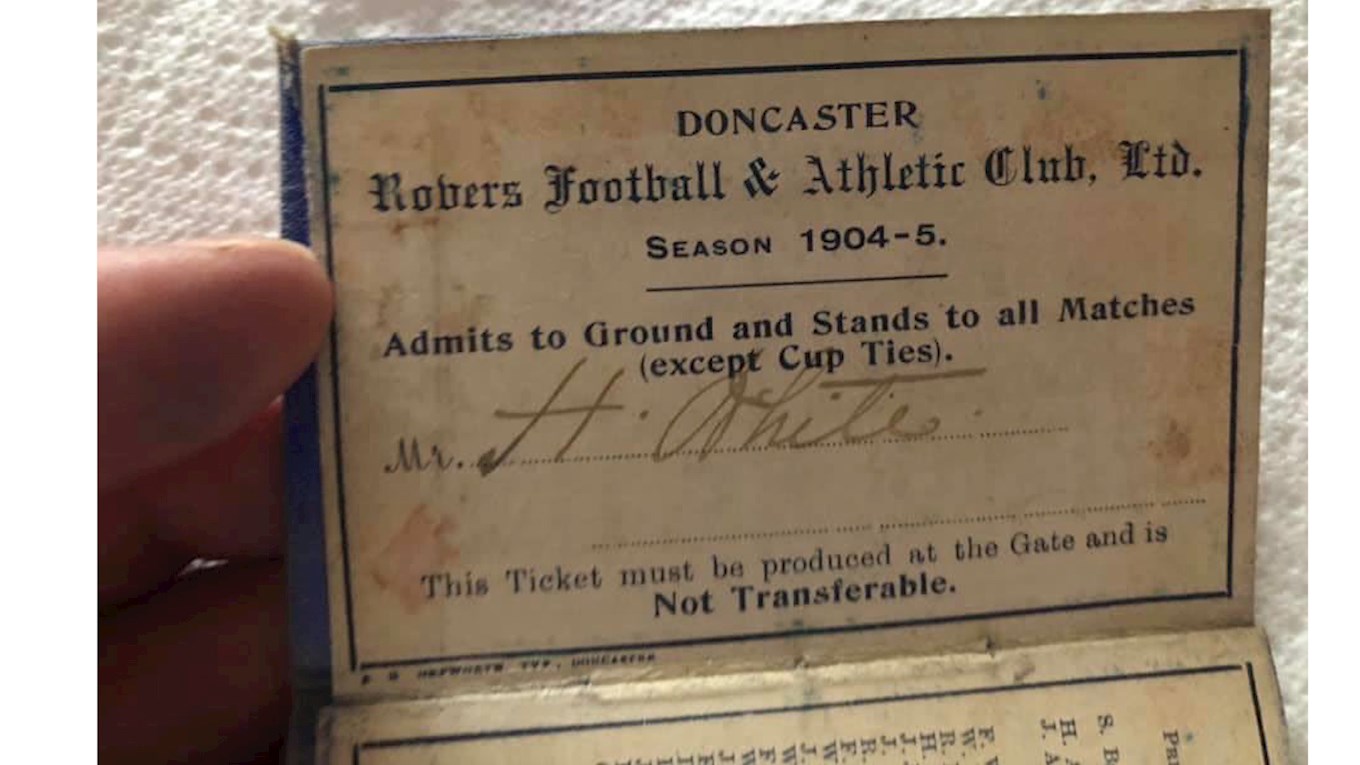 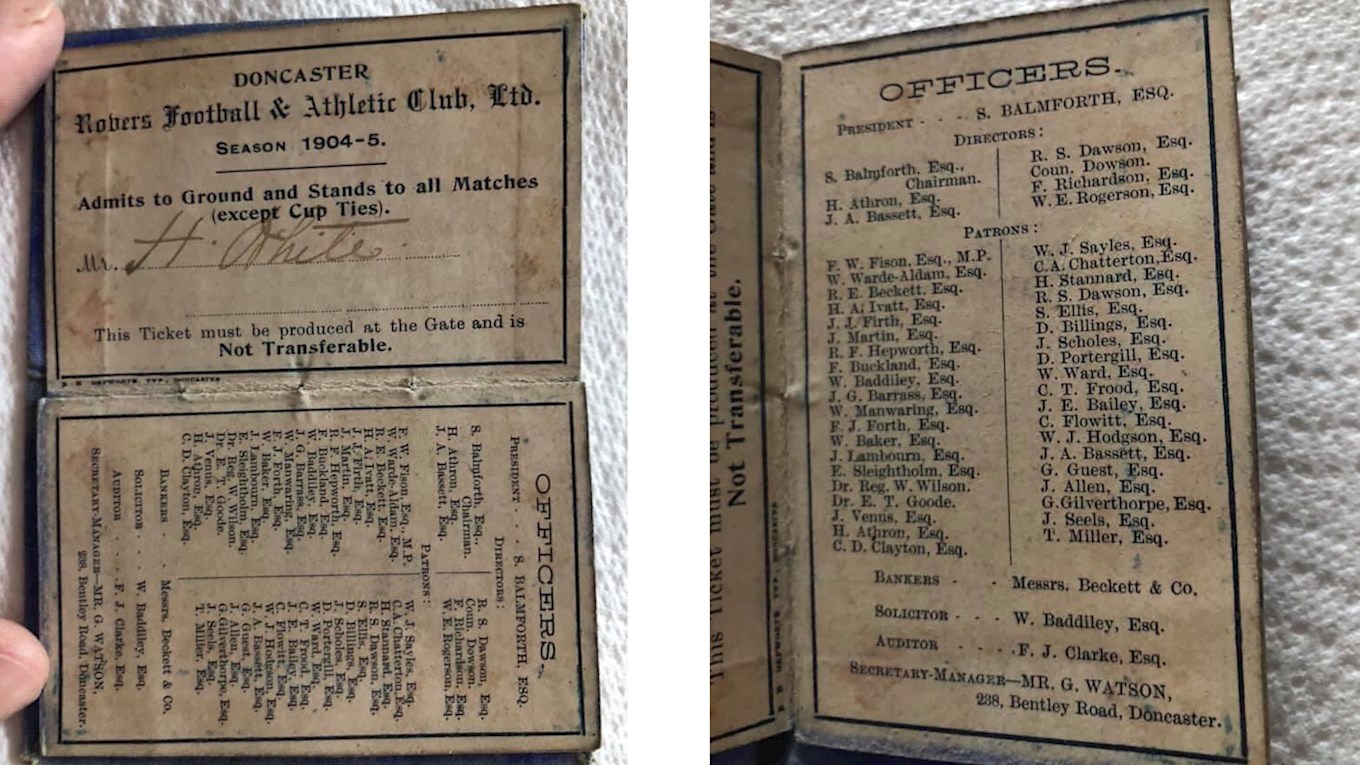 This shows the inside cover of the ticket booklet and the first page. Rovers had recently changed their name. Since their formation they had operated as a Members’ Club, with an elected committee. Now they had decided to follow most Football League clubs by becoming a Limited Company with directors answerable to shareholders. The Doncaster Rovers Football & Athletic Club Ltd. had been incorporated on July 1 1904, with share capital of £1,000, made up of 2,000 shares at 10 shillings (50p) each.

The first page lists the directors and patrons (who made a personal financial contribution to the club). The chairman was Stanley Balmforth, a confectionery manufacturer who had long been involved with Rovers and was also club president. The club also had their first paid secretary-manager, George Watson. His role seems to have been mainly administrative with little involvement on the playing side. He did not remain in his paid role very long as he was dismissed in December 1904, possibly as an economy measure, and replaced by an unpaid Secretary. 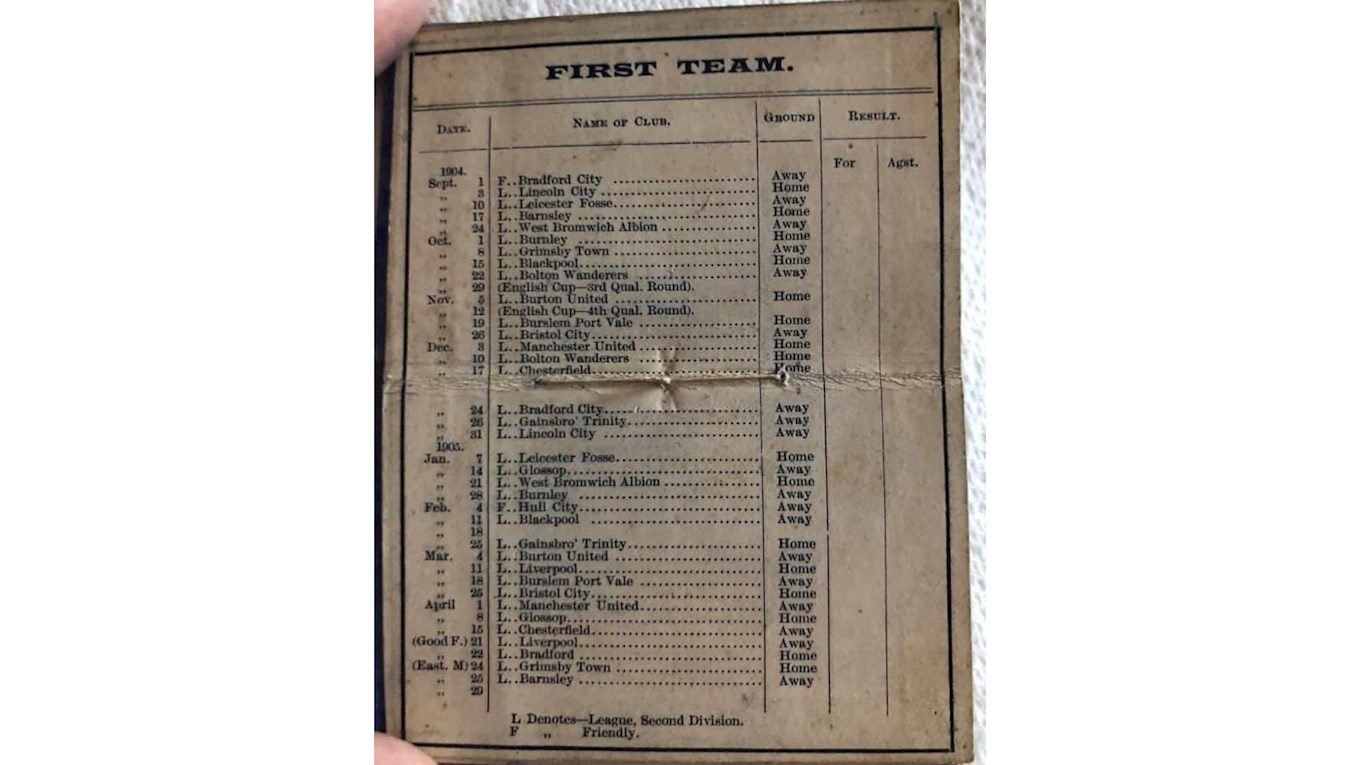 The centre pages of the booklet show the first team’s fixtures for 1904-05. Rovers had been elected back to the Football League in June 1904 after a season’s absence. A year earlier they had failed to be re-elected after finishing third from bottom in Division Two. Their place was taken by the newly formed Bradford City. Rovers endured a disappointing 1903-04 in the Midland League, finishing only 11th of 18 teams, but when they applied for election in 1904, they were successful.

So, the Season Ticket booklet included a list of 34 Football League Division Two fixtures, plus two friendlies, one at Bradford City - presumably to show there were no hard feelings - and another in February 1905 against Hull City. City had been established in April 1904 and had not managed to find a suitable league to join, so were playing friendly fixtures. Dates were left open for two FA Cup matches, both in the qualifying rounds, as league clubs did not then have automatic exemption to the competition proper. 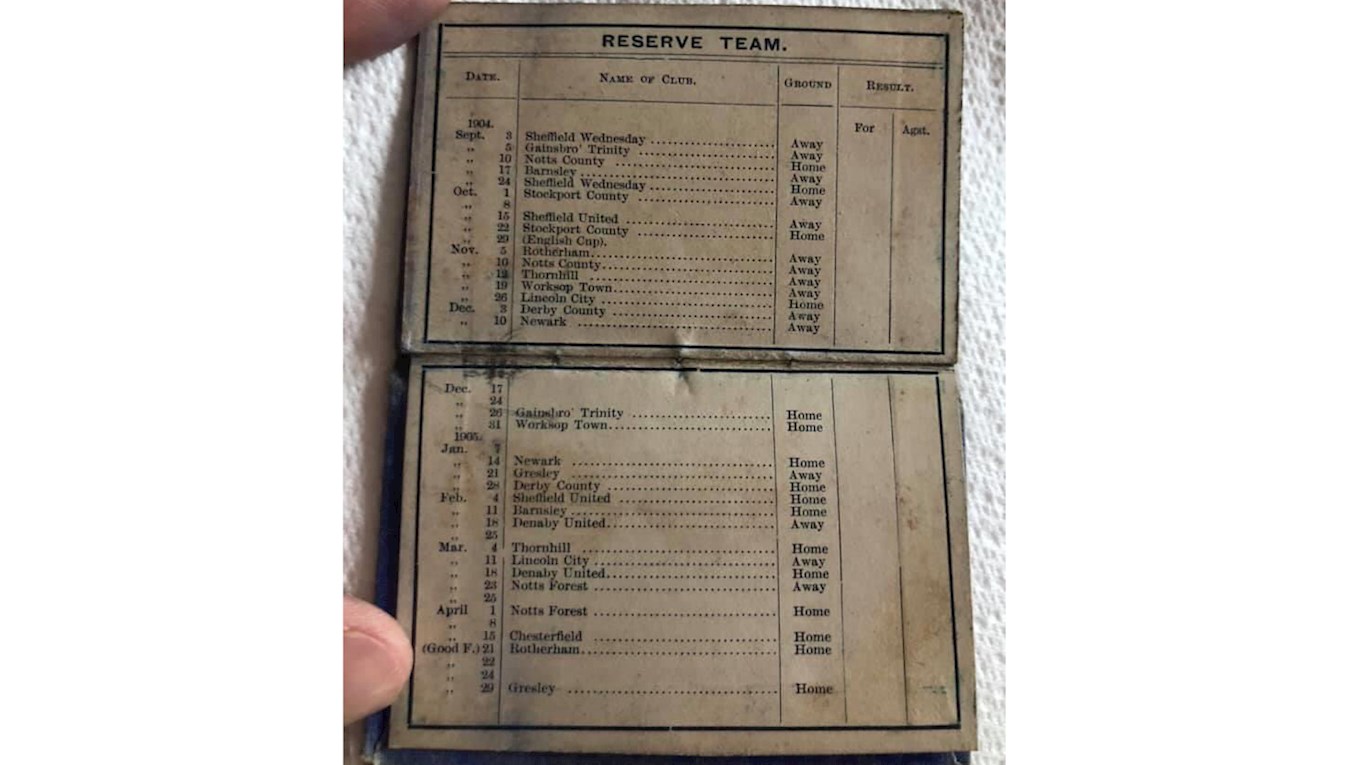 The final two pages of the booklet are taken up with the fixtures of the reserve team, which had taken the first XIs place in the Midland League. The league featured a mixture of reserve sides of Football League clubs and non-League sides, some of whom still exist today. Thornhill United were the fore runner of Rotherham County, who were elected to the Football League in 1919. Six years later they merged with Rotherham Town to form Rotherham United.

Sadly the 1904-05 season was something of a disaster for Doncaster Rovers, and our season ticket holder might well consider that his 15 shillings was money poorly spent. Rovers gained only eight points, equalling an unwanted Football League record. Their three wins and two draws were at least gained at home. They were knocked out of the FA Cup at the first hurdle by non-Leaguers Mexborough Town and were soundly beaten in the friendlies at Bradford and Hull. The Reserves finished bottom of the Midland League with only ten points and suffered some heavy beatings. In the words of the Doncaster Gazette’s football reporter, it was “enough to make Angels weep.”

To add insult to injury, although the Football League voted to expand from 36 teams to 40, Rovers finished bottom the election ballot. Hull City, as well as newly formed Leeds City and Chelsea would play in Division Two in 1905-06, but Rovers would not. They returned to the Midland League and it took them 18 years to regain League membership. The 1904-05 season is therefore a significant moment in Rovers’ history, and it is wonderful that we can tell the story of this reminder of the season.

Once again, we are most grateful to Ian Wilson for allowing us to reproduce his photos here. Ian obtained the ticket from his late grandfather. Ian’s great-great-grandfather was William “Billy” Calder, who played for Sheffield United, Gainsborough Trinity and Barnsley St. Peters before appearing for Rovers in the Midland League in the 1890s. When Rovers were reformed in 1920, Billy took on the role of honorary manager and assembled the players who would start the 1920-21 Midland League campaign, based at the Bennetthorpe Ground.

In the summer of 2019 and to mark the 140th anniversary of Doncaster Rovers, John Coyle provided content for a brand new history section for the Rovers website including significant events in the club's timeline, player and club records, detailed profiles of the club's hall of famers, information about each of the stadiums the club has called home, and all of the club's league and cup honours. You can learn more about the club's rich history here.