Jon Taylor has made an excellent start to life on the pitch for Rovers this season, but his work off it has been arguably more impressive.

He is set to be named the club’s Disabilities and Inclusion Ambassador in the coming weeks and his efforts in the role so far have been outstanding. Jon has been pushing to reach out to people with disabilities and autism connected with the Club Doncaster model as well as those struggling with their mental health during a very difficult period for everyone. He even set up an email address where people can reach out to him for support or a chat. 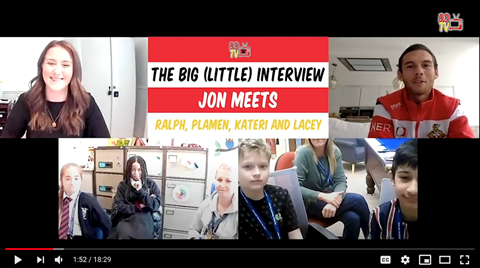 After taking a real interest in the work of Club Doncaster Titans (a football club set up to give children and adults with disabilities a place to play football), Jon was looking forward to being introduced to some of the participants and their chairman Darren Warner who created the club and has grown it to the club of 150 members that it is today.

He chatted to the youngsters about his career, their football, and told everyone: “if you enjoy what you’re doing it, keep doing it”. He also praised Darren’s incredible work.

“I’ve been told a little bit about the project,” Jon told Darren.

“It’s absolutely amazing what you’ve done. Congratulations, it’s unbelievable and you should be so proud.”

The Titans linked up with Club Doncaster in 2016 in order to get better support and facilities for their growing football club, and getting the support of the Rovers players offers the players a boost too.

“There was a lot of excitement when the players and coaches of Titans found out that Jon Taylor would be joining us,” added Darren.

“Being able to give them this opportunity in a safe, socially distanced way means a lot to us and  it was fantastic for all involved.

“Jon was brilliant on the call, really taking the time to chat to us about his life as a footballer and letting the kids ask him lots of questions.”