Darren Moore feels there is more to come from Madger Gomes this season after he netted Rovers’ first goal of the 2020/21 Sky Bet League One season.

Rovers took the lead in the second half against MK Dons through a stunning goal from Gomes but Baily Cargill’s 88th minute equaliser cancelled out the Spaniard’s effort.

Moore said: “It is really important for Madger Gomes to add goals to his game this season. We know he has a lovely left foot on him. He’s looked very strong especially when he came back this summer. 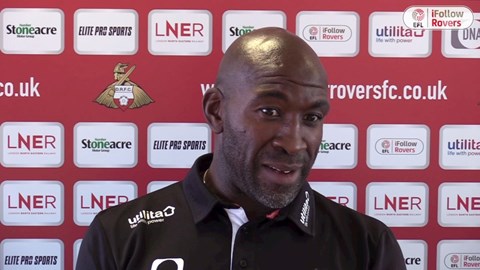 “Madger’s a clever player, he sees passes, can quicken up the play and a wonderful appetite and desire. This summer he has come back in good shape and good form and it’s now down to him how well and far he can take this season.

“Today it was a well struck goal from him today. At the time we felt that we were in the ascendancy coming out in the second half and it was about seeing the game through. I’m disappointed we conceded late but looking on the balance of the game, I think a point was fair.”

Tyreece John-Jules and Rayhaan Tulloch were handed their senior debuts after spending half of the week in training after joining on loan from Arsenal and West Brom respectively, Moore says he had no hesitation in starting the pair.

Moore added: “It was the right type of game to bring them in and I thought they responded really well for two young lads. There’s been a lot of information we’ve given them over the last 48 hours and they’ve been excellent in terms of how they responded to it all today.

“It is about managing both players and getting their minutes up to a level to where they need to be at fitness-wise. Their contribution to the team has been really well.

“With the relentless programme we’ve got coming up in the next two to three weeks every single player will get their part to play. My message has been clear to all the players to be ready because I will call upon every single one of them.”