Ray Tulloch says he enjoyed his first taste of competitive football in a Rovers shirt after making his debut in the draw against MK Dons.

The forward provided the assist for Madger Gomes’ second-half strike, before Baily Cargill levelled the scores for the visitors.

He said: “It was a good experience to get out with the boys, it was tough but everyone put in a shift to earn a draw. 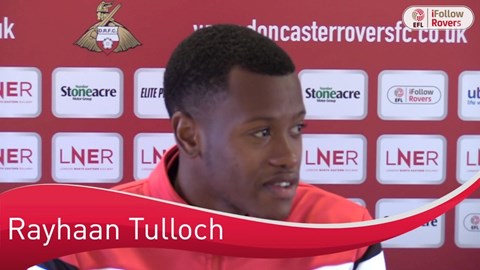 “We did well for the majority of the game and kept them out, it was just disappointing to concede the goal late on.

“It was a different type of game for me than I’ve been used to, the winning mentality is good within the dressing room.”

After only a couple of training sessions since joining the club, Tulloch says he is looking forward to developing the relationship between him and his new teammates.

He added: “Coming from West Brom I didn’t really know anyone or the area but everyone has welcomed me and I feel wanted.

“I’m still getting to know the boys so I’m sure once I’ve had a few more training sessions I’ll improve.”