As we enter 2021, Head of Rovers Academy Foundation Phase Michael Pedley provides and update on a challenging opening half of the season.

The Foundation Phase age groups have endured a stop/start season so far, having come back (refreshed to say the least!) in September.

The return lasted eight weeks ahead of another four weeks off in November before resuming for 3 weeks in December and stopping again for the Christmas break.

While it provided a different challenge of training from home, it was great to see so many parents supporting our program, with many mums and dads seen playing their part as goalkeepers and/or defenders!

We also created a partnership with The Coaching Manual at home training app Top Tekkers which helped us better support our players as they trained at home. (Read more by clicking here).

When we have been able to train and play matches, the application, effort, and openness to coming back into a learning environment from the boys has been first class.

Even though we have only been able to train and play matches for 10 weeks so far this season, we have managed to cram in some great experiences for the boys. Alongside our usual games programme, the U9-U12 players have been able to play an array of top teams, such as Liverpool, Leicester City, Leeds United, Sheffield United, Sheffield Wednesday, Hull City, and Wigan Athletic. This calibre of opponent will continue into 2021 as we will start the new year with a trip to Manchester City while we also have a three day residential tournament to look forward to in the Easter Holidays, hosted by Manchester United.

Being able to play these types of fixtures serves great purpose in terms of variety for the boys, who are able to test themselves against some of the country’s best players of their age. 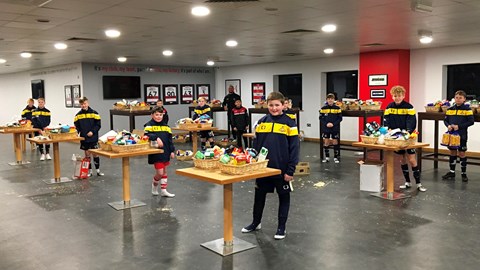 Early in December, the U11 and U12 age groups volunteered an evening of their time to also help pack Christmas Hampers, which were later handed out to isolated people in the Doncaster area.  (Click here to watch the video)

It was a great chance for the players and staff to take a moment out of their regular schedule to help support the local community. We are blessed with fantastic facilities here at the Keepmoat Stadium in Doncaster, so we all jumped at the chance to give something back.

We look forward to returning on Monday January 4.

Happy New Year from myself and all the staff in the Foundation Phase.