Rovers bowed out of the Emirates FA Cup with defeat to West Ham at the London Stadium.

A goal inside three minutes for Pablo Fornals was an indication of how big the challenge was for Darren Moore’s men away from home and despite hitting back with a couple of half-chances, the quality of the opposition shone through - Andriy Yarmolenko’s chip over Ellery Balcombe was sublime to double the London side’s lead.

The game was put out of sight when Andy Butler headed past Balcombe early in the second half while Oladapo Afolayan tapped in from six yards.

Moore made just one change from their Sky Bet League win over Rochdale midweek. Reece James came into the middle of the park in with Taylor Richards dropping to the bench. He was joined in the middle by fellow fullback Brad Halliday, with Joe Wright filling in at right back. AJ Greaves missed out due to being cup tied.

David Moyes fielded a strong team stating in the lead up to the game that his Hammers side were taking the cup seriously while keeping one eye on the league – where they are currently sitting in seventh with European aspirations very much alive.

It only took two minutes for the Premier League to land their first blow. Fornals tapping home a cross from Rovers left with West Ham’s first attack of the game giving Darren Moore’s men a big mountain to climb.

Efforts from Said Benrama – who probably should have done better when he broke the defensive line – and Andriy Yarmolenko could have had the tie wrapped within 10 minutes but Rovers back did manage to settle into the game and created their first half-chance on the quarter of an hour mark when Jason Lokilo won a free kick which was drilled to the back post by Jon Taylor. Butler kept it alive but West Ham were able to clear.

Despite Rovers better play, the Premier league side doubled their lead on the half-hour mark. A neat through-ball split the Rovers defence and Yarmalenko finished with the deftest of touches over the onrushing Balcombe.

Joe Wright had Rovers’ best chance of the first half – Taylor’s free-kick was only cleared as far as Fejiri Okenabirhie who kept the chance alive nodding to Wright at the back post. The centre-back (who had been deployed at right-back for this game) sent a looping header on target, but it was easy enough for Lukasz Fabianski to claim.

The final action of the half was from Manuel Lanzini who fired over from 30 yards – perhaps and indication of the swagger and confidence the Hammers were playing with.

Balacombe was in the action early some superb saves. His first was down to his right to deny Benrama whose free kick was over the wall and looked to be creeping inside the near post, while his second was to his left to deny Lanzin. His third was an important tough to tip Tomas Soucek’s dipping volley over the crossbar while his fourth was arguably the most impressive when a big left hand denied an effort from close range at his near post.

Unfortunately, the young Brentford loanee was given no chance when a corner was whipped in by the home side - Butler got his head to it but was only able to send it into his own net.

Rovers strung their best move of the afternoon together on the hour mark. Wright burst down the right and played a ball into the Okenabirhie – the ball was worked back out to Wright and hit to the back post towards Lokilo who was sandwiched as he lost out in the air as the ball was cleared as far as Matt Smith. The Welsh international connected brilliantly with the ball and rattled the cross bar.

Lokilo was unable to recover from his injury and was replaced by Elliott Simoes while that was also the last action of Smith’s afternoon – he was replaced by Taylor Richards.

Rovers started to zip the ball around and Cameron John stung the palms of Fabianski after some neat build up play around the edge of the box between Brad Halliday, Reece James and Richards cut the West Ham defence open.

But West Ham stretched their lead even further when Ryan Fredericks’ effort at the near post was saved into the path of substitute Oladapo Afolayan who tapped into an empty net from six yards. 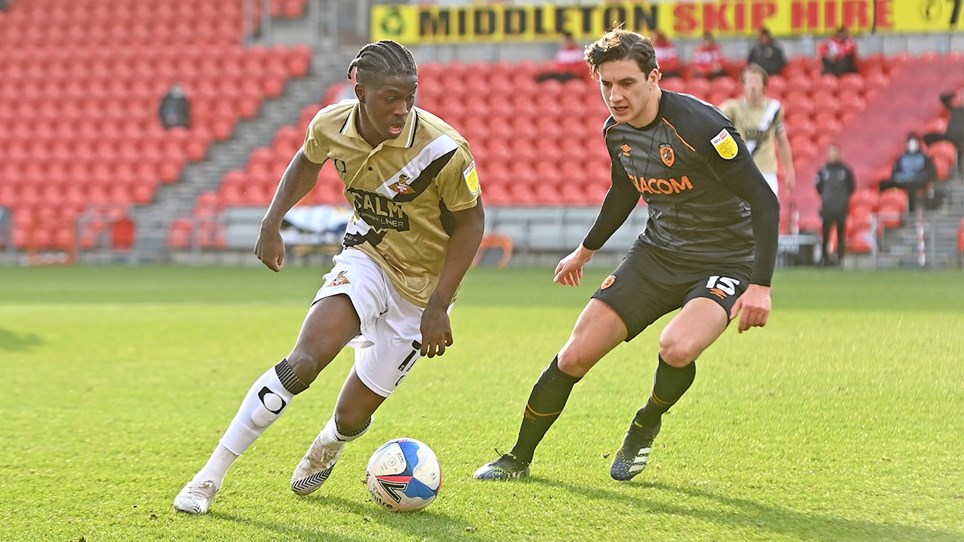