As well as the pies, the supporters received a special matchday care package from the Foundation - which included snacks and merchandise – and were invited to jumping on a Zoom call which gave fans chance to have a chat while watching Oxford United vs Rovers on iFollow. 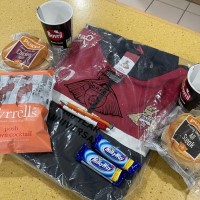 The watch-along was hosted by the Foundation and Oxford United in the Community and was joined by former Us and Rovers player Les Robinson as well as special guest John Bostock.

The Zoom call gave people who have been completely isolated by COVID-19, the chance to enjoy some company and have a chat about football. Learn more about the project here.

Eric Twigg foods are a well-established family run company, famous for their distribution of Pukka Pies. They were founded in 1966 by chairman Eric Twigg and have been a long-time partner of Club Doncaster and supporter of community initiatives.

Managing director Matthew Twigg said: "Eric Twigg Foods have always been proud to help with community initiatives with Club Doncaster, so of course we were delighted to help bring an authentic match day experience to fans by providing Pukka Pies and Bovril for them to tuck in during the game!

“It's so important for us all to stick together through the unprecedented times, and even more so now that we are so close to normality. We hope all the fans had a great time – despite the result - and hope the Pukka Pies and Bovril helped create that authentic terraces experience.

“Hopefully it’s not too long until we’re enjoying these staples of a matchday diet back in the stands while cheering on the teams in person.”