Rovers came from two goals down to take a point at the Priestfield Stadium.

Goals from Jordan Graham and Vadaine Oliver inside five minutes gave Rovers a mountain to climb but a second mad period from the 19th minute to 23rd minute saw Tom Anderson and James Coppinger get Rovers back level.

After that, the match settled. Rovers probably boasted the best of the remainder of the first half, while Gillingham edged the second half with Joe Wright clearing the ball off his own goal line on two occasions. The home side didn’t have everything their own way though and Brad Halliday also had a chance cleared off the line by a defender after Jason Lokilo was bundled over in the box.

Butler made four changes from the side who suffered defeat in midweek with Reece James, Omar Bogle, and Josh Sims returning from injury while Branden Horton was handed his first league start after a successful twenty-minute cameo on Tuesday evening.

It was a disastrous start for Rovers who found themselves two goals behind within five minutes of kick-off. A lucky break in the middle of the park put Rovers’ defence on the back foot and Graham was one of three played in the six-yard box lining up to tap into an empty net and put the home side ahead.

Minutes later, Oliver – who was unmarked at the back post – volleyed in from point blank range after a smartly worked long-throw routine.

Rovers began to find their feet ten minutes in. Matt Smith’s through ball found the run of Fejiri Okenabirhie who pulled his shot wide of the far post while James Coppinger’s similar pass was well met by the run of Omar Bogle who rounded the keeper before being flagged offside.

Rovers’ skipper Anderson did get one back on the twentieth minute. It came after a period of pressure beginning with a free kick by Bogle (which was into the wall) and followed by a succession of corner. It was a fierce Coppinger delivery which found was met brilliantly by the skipper to get Rovers on the front foot.

Less than five minutes later, Rovers had equalised with the provider turning goal scorer as Coppinger latched onto a ricocheting ball in the box and finished well.

Rovers began to string much better passing together and – when they were able to play through the thirds – Smith in particular was helping to cause real problems with perfectly weighted through balls into the runs of Coppinger, Bogle and Okenabirhie which were centre meters from creating unmissable chances. Anderson had another chance from a corner – this time a

At the other end, the Gills continued to cause real issues with their directness with corners, crosses and long-throws asking plenty of questions of Rovers defensive unit.

The visitors ended the half in the ascendency with Coppinger’s runs in behind the defence leading to a number of half-chances. The best chance came in stoppage time when good football down the right between Reece James, Sims and Halliday worked the ball into the no.26 whose effort was lashed over the bar.

The second half got off to a slow start with niggling fouls and breaking up of the play preventing any team from really stamping much of an authority on the game. The Gills continued to use set-pieces to search for a goal but Rovers were able to deal with much of it – partly because of the energy of runners to ensure every potential corner was turned into a throw-in.

Rovers had a chance when Okenabirhie held off his man to run the ball to the by-line – his cut-back was smartly intercepted by Jack Bonham in the Gillingham goal before finding Bogle who was waiting for a tap in.

Gillingham penned Rovers back for ten minutes and while the balls into the box needed good defending – the only effort of note was a looping, skipping effort by Alex MacDonald which was cleared off the line by Joe Wright.

Rovers then had a chance of their own cleared off the line when Brad Halliday’s cross-cum-shot was cleared off the line to substitute Jason Lokilo who – after being bundled to the ground in the build up – managed to put in a cross from the floor which was headed narrowly over by Bogle.

Horton got into a good position, but it ended with a tame, right-footed shot which was collected by Bonham and Taylor Richards – who replaced Coppinger – also saw his right-footed effort blocked.

Wright put in another big block to deny Kyle Dempsey but neither side were able to get a winner in a match that continued to be played end-to-end all the way into the seventh minute of added time. 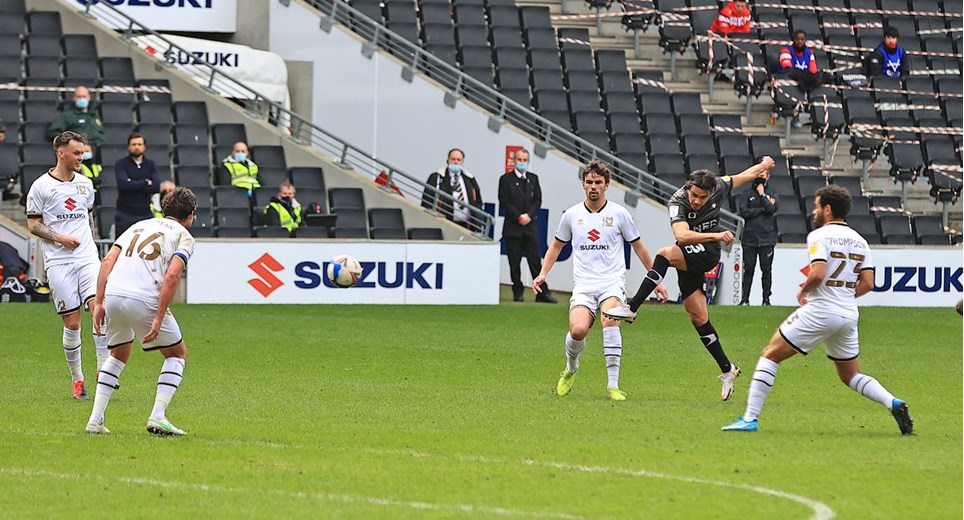