Young Academy coach Cam Foulkes has completed his UEFA B licence as he takes the next step in his coaching career.

Foulkes was part of the U18s squad in 2018/19 season and travelled with Rovers first-team as the 19th man on a number of occasions that year but at the end of the season he found himself part of the Academy’s exit strategy.

“I’ve had quite a good experience leaving the clubs I’ve been at but there are still bad memories attached to it,” Cam said. 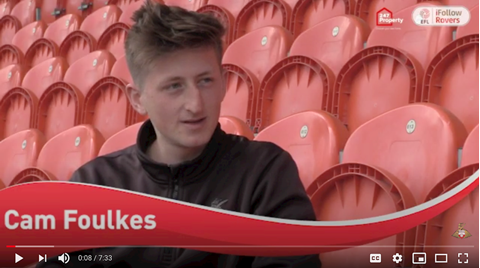 “I was released by Doncaster but upon being released, they said that there might be an opportunity to come and coach. I was a hesitant because I thought I just wanted to get away from football.

“At first, I thought I was going to study banking but that was a bit of a denial stage and looking back, I was never going to do that. I’ve played this game since I could walk and it would be silly to waste the experiences – good and bad – which I can now pass onto other people.”

Completing coaching levels is a key part of the LFE scholarship programme which is completed by all U18s Academy players but it wasn’t until later that Cam really built up a passion for coaching.

“As part of your scholarship, you get your second level of coaching so this was the next step up,” he added.

“Because you get the first two levels as part of your scholarship, you don’t really see it as an achievement. You just have to pass it.

“I think in my head, completing the B license has been like a switch. It’s not a casual thing anymore, I’m taking my coaching seriously.

“I’d always thought that I’d struggle to have a career I was passionate about outside of playing football but coaching suits me down to the ground and I’d love to do more of it in the future.

As well as sharing his playing experiences with budding footballers, Cam has also created an online platform where former Academy players up and down the country can share their experiences anonymously.

“It’s called Inside the Mind,” he explained.

“I kept seeing articles and almost horror stories from people who hadn’t had the best experience of leaving an Academy.

“This platform allows players to tell their stories – it’s all anonymous but it can act like a support network. It’s been really good to speak to sport psychologists and coaches – a lot of people agree that there is a lot fundamentally wrong with the system.

“Clubs like Doncaster Rovers – and I’m not just saying that because I’m sat here wearing the badge – do get it right.

“To fall out of love with football and then to become really passionate about it all under the same banner is incredible really.”