Branden Horton says his run in the team towards the end of the 2020/21 campaign has improved him as a player after he signed a new one-year deal with Rovers.

The 20-year-old put pen to paper after making 11 appearances and impressing in the left-back role since coming into the side in March. 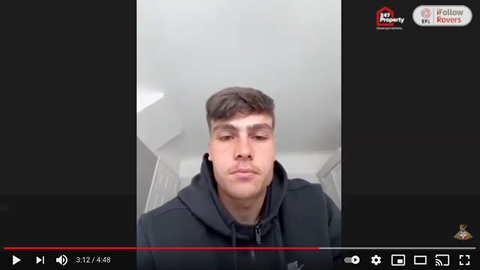 He said: “I’m very pleased to have signed, I’ve worked hard after getting my chance and I feel like I’ve done well in those games.

“The majority of the results haven’t gone our way but I think my own game has improved a lot in that time.

“Being on the run we’ve been on has been a big learning curve, and even when it’s not going in your favour you have to continue to apply yourself in the right way.”

Horton already has his sights on an important off-season where he will look to cement a spot in the starting XI.

He added: “I love the gym and I’m always in there trying to get stronger, I’m training with Louis Jones in the off-season so we can push each other.

“I’ll be doing everything I can to hopefully impress whoever the new manager is, to give me a chance of playing regularly next season.”